Osaka - The City of friendly People

The very moment you ask for directions in Japan you have a personal guide. Almost every time we asked for the way we were taken by the hand and directly brought to our destination. And that is only one example of the extrem japanese friendliness.

As we found out there is no better way to start your day than having Udon for breakfast at 12 am. Udon is mostly served hot as a noodle soup in a mildly flavored broth. Because of the language barrier we ordered Udon with ? (no idea) but both of our meals turned out to be amazing and for only 350 Yen (around 2,50€) a true bargain.

We highly recommand buying the so called “Osaka amazing pass 3 days” for only 3000 Yen (21€) which allows you to have unlimited rides on trains and buses without paying admission to 28 popular tourist sites. 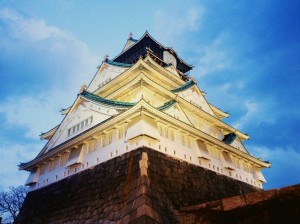 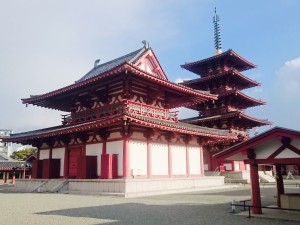 Tsutenkaku tower (103m) offers good views. It is also enshrined with Billiken statue which is said to bring good luck when it's foot is stroked. 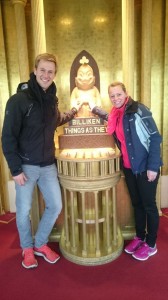 Lunch break in the Shinsekai neighborhood of Osaka, which is famous for its Kushikatsu. Thats a Japanese dish of seasoned, skewered, grilled and deep-fried meat, seafood or seasonal vegetables. The neighborhood is great but the dish is not really worth to try – the oil used to fry overweighed the rest of the flavor. 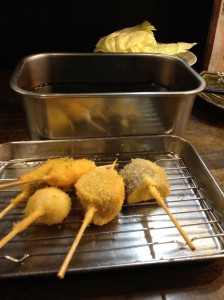 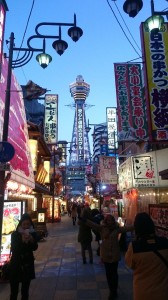 The HEP Five ferries wheel is amazing but a bit scary. It's 109m high and you can plug in your mobil and listen to your music. The turn takes  15mins with marvelous views of the city. 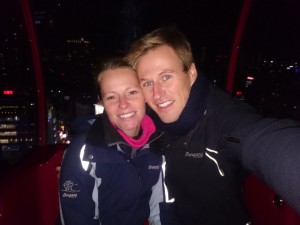 Walked to Floating Garden Observatory in the Umeda Sky building. Another skyscraper but only 173m high with an amazing architecture and a 360 degree open roof top observatory let you overlook the city of Osaka. Especially at night all the lights look amazing. 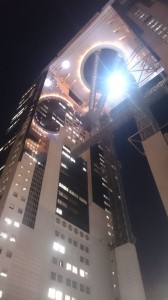 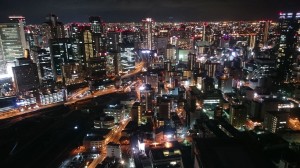 Finishing a perfect sightseeing day with sushi in a common fast-food restaurant where the plates with the sushi are placed on a rotating conveyor belt. 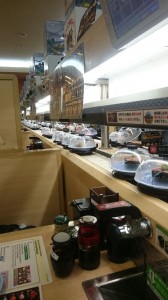 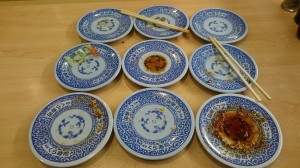 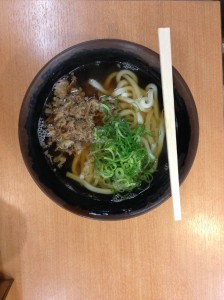 Relaxing river cruise but nothing special. 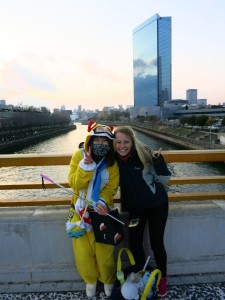 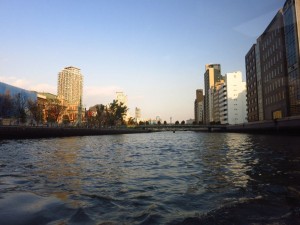 Exploring the area around Namba Station: Dotonbori Area, which is a busy shopping area with thousands of people, countless restaurants and shops. Within the area the Hozenji Yokocho Alley is an old narrow stone path which is lined with friendly traditional restaurants, shops and bars. Very quiet and completely different from the rest of the Dotonbori Area. 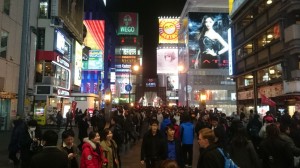 In a booklet we found a recommendation for a restaurant in the Dotonbori Area where they make Okonomiyak - a Japanese pancake. The batter and other ingredients were pan-fried on both sides on a teppan (in front of us). A bit skeptical we ordered only one (ham and cheese) but after trying it we went for another one. It did not seem to be a typical tourist restaurant and therefore we were the only “non locals”. Being very hospitable they proudly invited us to try a Japanese dessert. It's very hard to describe. I would call it a jelly-like confection covered with a dry powder which tasted a little like a sugar-peanuts mix. The consistency as well as the flavor was weird therefore we played rock scissor paper who had to finish both portions – guess who lost (Eva... haha) 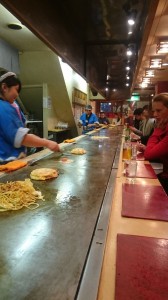 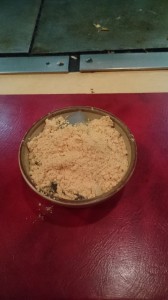 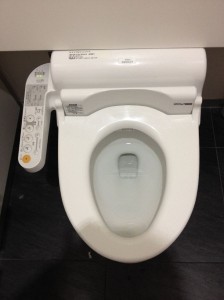 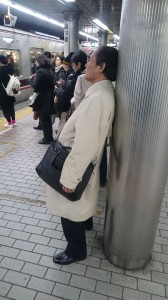 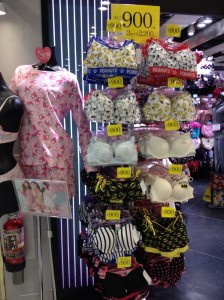 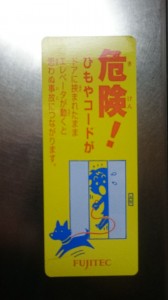 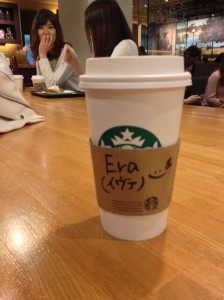 Two busy but amazing days gave us a good impression of the city, the lovely people but it’s not nearly enough time to get to really know this amazing city!