Ever since Niels older cousin told him about Ankor Wat he was dreaming about visiting this world famous temple areal. And we should not be disappointed. However, we started of with a little disappointment: the supposingly amazing sunrise never happend! The sky was extremely cloudy. But still the mighty temples of Ankor Wat were impressive. In the morning there weren’t to many tourist so it was very nice to explore the area before mostly huge groups of Chinese arrived. After Ankor Wat our Tuk-Tuk driver brought us to some of the other temples like Ta Prom, Preah Khan and so on. It’s not possible to see all the temples in one day but for us one day was perfect because after seeing at least 50 temples in the past few weeks we were kind of saturated with temples sightseeing. The city of Siem Reap has not much to offer besides many cafés, bars and restaurants for the large amount of tourists. We found a local food place with good food and amazing fresh juices for only 1,3 / 0,70€. 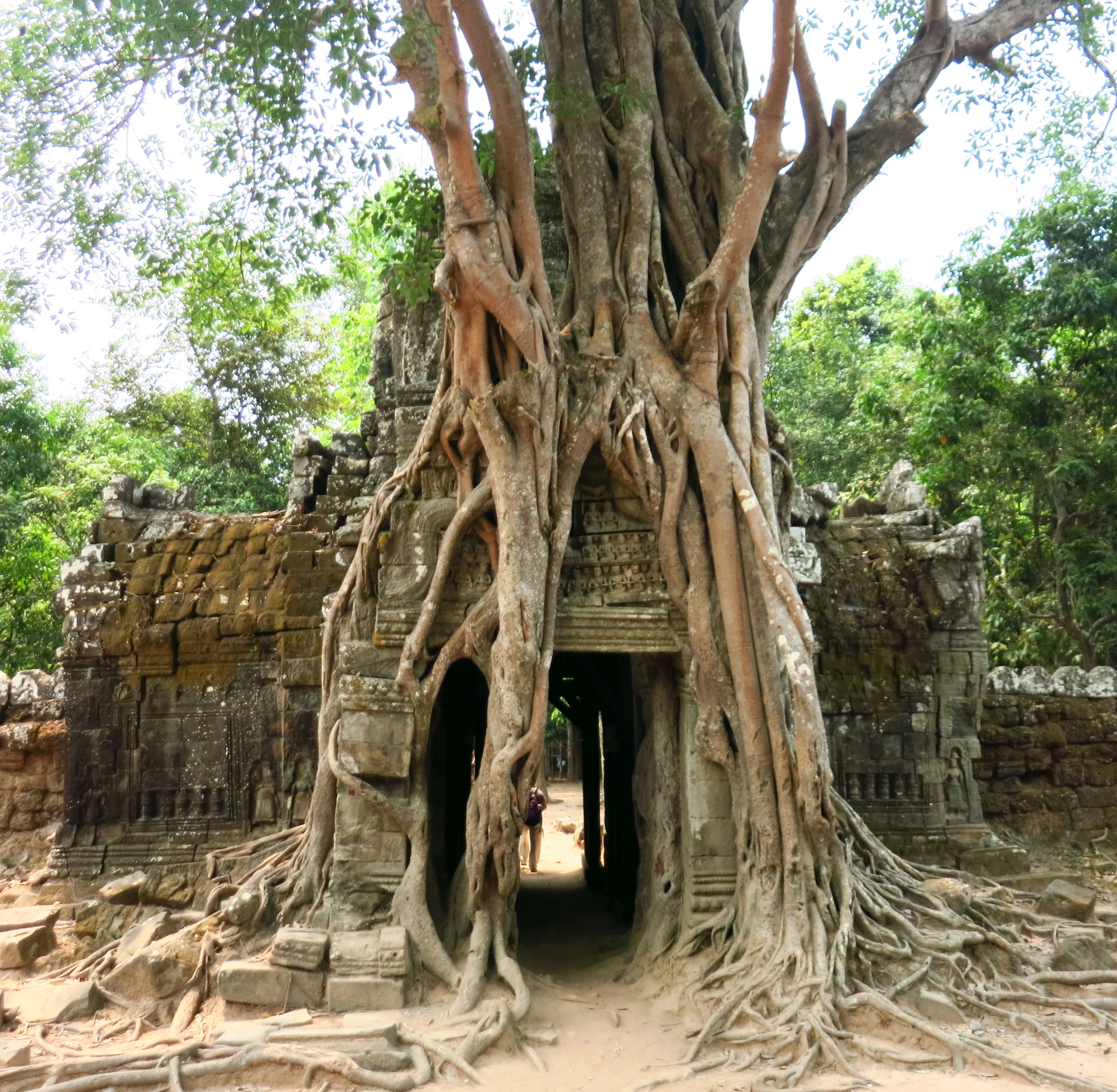 END_OF_DOCUMENT_TOKEN_TO_BE_REPLACED

Koh Rong Samleom: a place to hang lose and relax.

On our way we met two German guys who where looking for a place to stay. Our accommodation had one bungalow left so they decided without further ado to stayed in the same place. The next days we spent quite some time together chatting or playing cards, volleyball, frisbee and so on. The place consisted of a few huts and a main place. It was surrounded by “jungle” and was very quite. We had nothing to do besides sleeping, swimming and relaxing.

But a next adventure was waiting for us. The moment we left the place everything went different as planned: arriving at the dock we found out that the boat to the mainland left earlier than scheduled therefore our planned buffer time went down from 4 hours to -1h. We were pretty sure we wouldn’t be able to catch our flight. Luckily, we found another boat that took us to the mainland and we still had 1,5 hours before our official departure time. Normally it should take only 30 mins from the harbor to the airport with a Tuk-Tuk. Unfortunately, we found a a driver who realized that we were in a hurry and drove extra slow. After a while he slowed down even more and told us he could only drive faster if we give him extra money because driving faster would take more petrol. So we were thinking: for sure not, but saying: “sure, just go a head”. He speeded up a bit and we reached the airport 35 mins before departure. Luckily, the airport is very small and there was only one airplane in the parking slot. While Niels had a “polite” discussion with our driver, I arranged the check-in. Niels hardly ever gets really angry – this time he was. So angry that surrounding people steped in and settled the little dispute (including a police officer ;). The rest wasn’t a problem at all: the baggage was checked in easily and the waiting time was reduced to 10 mins before boarding 😉

Our luxury villa for the next few days…

END_OF_DOCUMENT_TOKEN_TO_BE_REPLACED

Phnom Penh was quite a surprise: on Saturday night it had a great atmosphere around the palace area as people were sitting outside on the gras and enjoying life. It was a wild mixture of people also including quite some monks.

What we saw and experienced the next day wasn’t easy to digest and I think it changed us for good. It was by far the saddest day of the whole trip. I am pretty sure I wouldn’t find the right words to describe the killings fields of Choeung Ek – all I can tell you is that we find it to be a must-see in order to understand Cambodia and make genocide like this not happen again.

After we took our time to digest our first impressions not only at the killing fields but also in the Tuol Sleng Museum also called S-21 we moved on to see the Royal Palace (which was a very weird mixture of sightseeing – we suggest to take the day off after the killing fields). The Royal Palace is really nice to the with its traditional Khmer roofs and the calm atmosphere in its gardens.

Loads of people on the street… 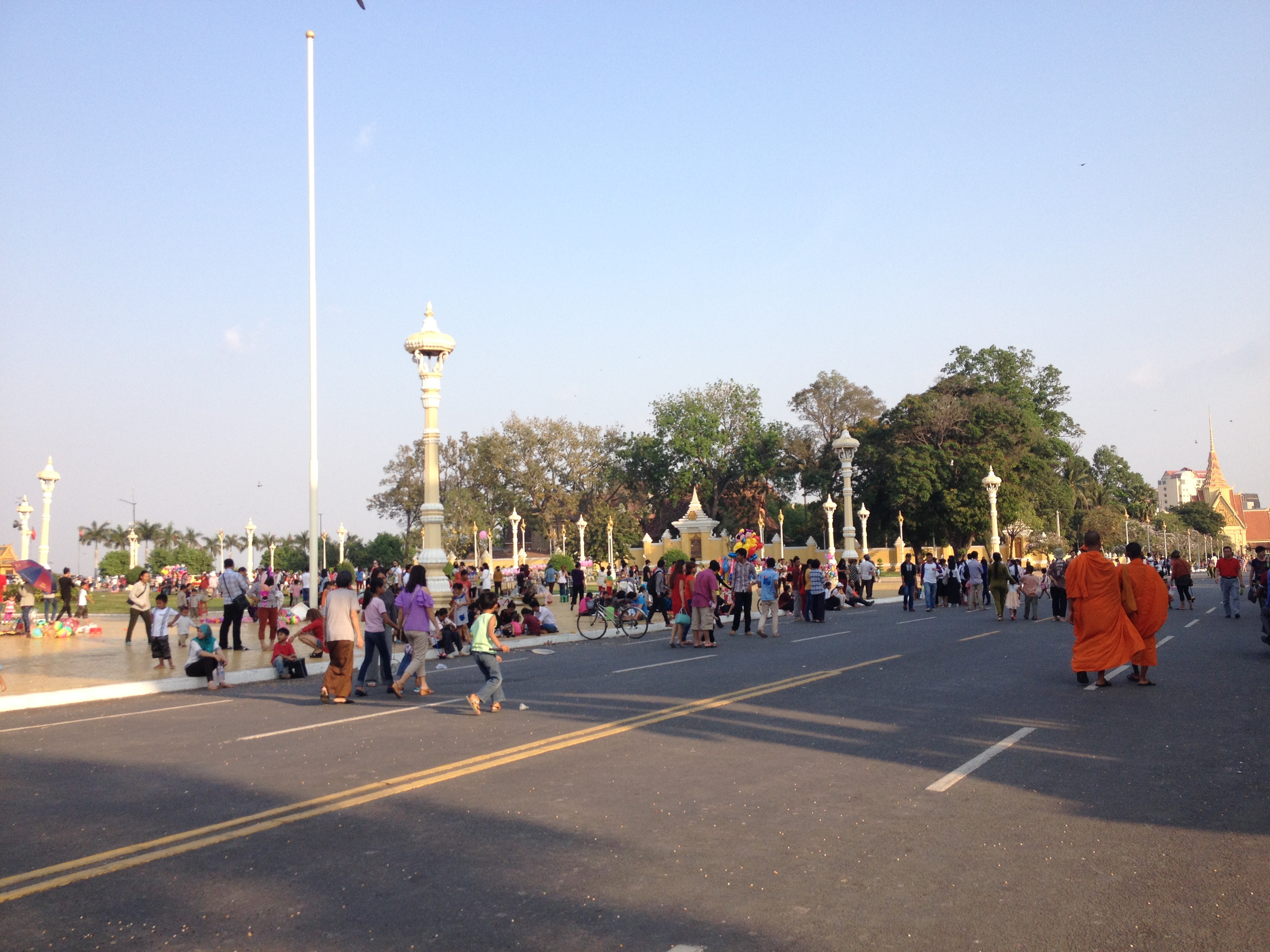